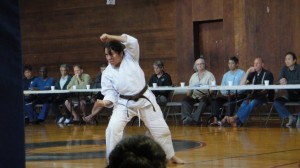 Each Fall semester and Spring semester, the CSULB Shotokan Karate Club offers the opportunity of belt-grading for those who would like to advance to a higher rank.

Rank is an award of recognition presented to indicate the progress of the student with regard to both the physical and the mental aspects of karate, and is thought of as a learning experience for both students and instructors.

All students of Shotokan Karate of America (SKA) begin with a white belt (unranked) and may advance through different levels of white, brown, and black belt. SKA does NOT award belts of other colors. The ultimate rank achievable, in this original ranking system created by Master Funakoshi, is godan (5th degree black belt), the highest rank ever awarded by him. SKA students should not confuse or compare this original ranking system, maintained by SKA out of respect of Master Funakoshi, to various other groups that award different color belts or higher black belt degrees.

Because all students have different potentials, it is important not to compare your progress with that of another. Grading and ranks should only be used as a means by which to measure your own improvement. During grading, consideration in awarding rank, other than for ones technical level, is given to age, time practicing, previous experience, physical potential, personal situations, attitude towards practice and others, concern for responsibilities, and number of special training.

It is important to remember that students have asked to be graded. It is, therefore, their responsibility to do their best during the grading, and to accept the rank awarded with dignity and humility. The most important part is the student’s attitude.

All grading candidates must arrive 30 minutes early to register, help setup tables and the dojo. Black belts are encouraged to participate in the grading process.